Larry Maddock is the pen name under which humorist and social critic Jack Owen Jardine (born October 10th, 1931) wrote science fiction and mystery stories from the 1950s through the 1960s. His writing career was preceded by several years in radio as a disc jockey and creative director for KALF radio in Mesa Arizona. As Larry Maddock he may be best remembered for his highly-acclaimed Agent of T.E.R.R.A. series, featuring the exploits of debonair, time-traveling secret agent Hannibal Fortune and his sardonic, shape-changing alien colleague Webley.

After the nineteen-sixties he concentrated on non-fiction essays about human sexuality, often written under his own name. Throughout the seventies he could frequently be found at various Southern California Science Fiction conventions as a participant in panel discussions on subjects like writing professional sci-fi or the complexities of human sexuality, or the slightly obvious, sex in science fiction… and often sharing the dais with such notables as Larry Niven, William Rotsler, Paul Turner or Theodore Sturgen, to name just a few, all of whom he counted as friends.

In the 1990’s Jardine officially retired from writing. A talented artist and an avid student of computer animation he devoted much of his last years to producing experimental animations on his computer, and living the leisurely ‘good life’ in beautiful Northern California.

Jardine died April 14, 2009 after a long illness. In addition to ongoing cardiac problems, Jardine suffered a serious stroke in 2005 from which he never fully recovered. He was 78 years of age at the time of his death and is survived by his daughter and two grandchildren.

Portrait by B. Ungar, from archives of Bill Mills 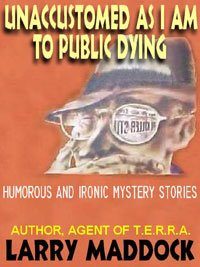 UNACCUSTOMED AS I AM TO PUBLIC DYING: Humorous and Ironic Mystery Stories by Larry Maddock